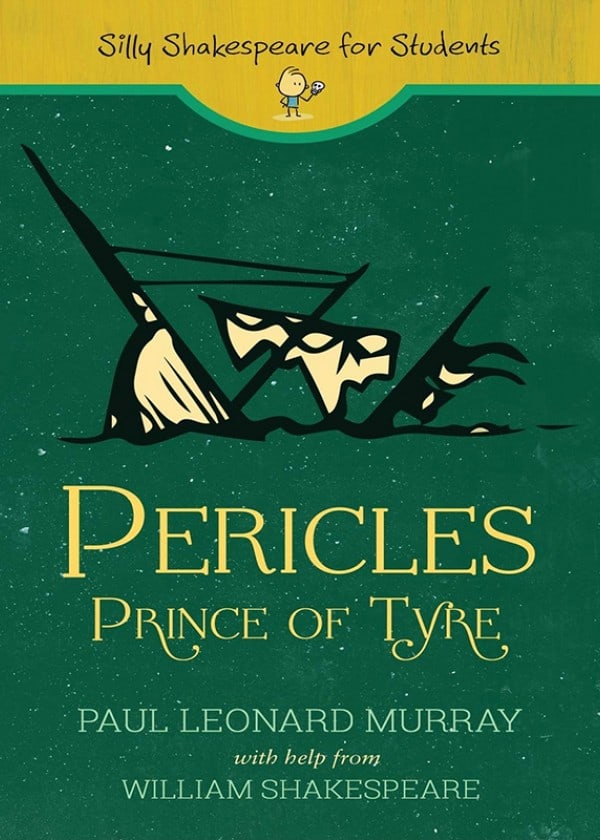 The concept is original and the execution brilliant. This is Dr Seuss meets Shakespeare, with all the joy of the former meshed with all the intrigue of the latter. —David Crystal, author of Shakespeare’s Words: A Glossary and Language Companion and Let’s Talk: How English Conversation Works

But bottom of the all-time list/ Of Shakespeare’s not-so-greatest hits/ The play which always fails to please/ The poor, unfortunate Pericles./ But before you stand and leave you a seat/ I have to say our play’s a feat/ Of editing and derring-do / To bring only the best to you/ In forty minutes, not one sec more,/ Your jaws will be upon the floor.

The Silly Shakespeare for Students edition of Shakespeare’s Pericles simplifies the famous play without dumbing it down. It’s perfect for introducing students to the Bard and helping English Language Learners practice speaking and oracy skills while grappling with the classics. Author Paul Leonard Murray, director of the Belgrade English Language Theater, has cut the play down to an hour or so and made the language more accessible. But he’s kept all the funny parts! Not only that, the whole thing is written in rhyming couplets. It’s Pericles for Students.

Pericles, Prince of Tyre, is considered one of Shakespeare’s worst plays and certainly one of the weirdest. Pericles sails the Mediterranean searching for a wife. On the way he encounters incestuous kings, bawdy fisherwomen, his wife apparently killed at sea, his daughter almost killed until she’s rescued by pirates and sold into prostitution, but using her wits, talks the governor of the island into marrying her, and happy endings for everyone! This version makes fun of the original and lends itself to an over-the-top, clownish style à la commedia dell’arte! Put the yay back into Traged-yay with this silly, but oh-so-fun version of a Shakespeare classic that he probably didn’t even write!

Production notes and a summary of the play make putting on Shakespeare easy and fun, even if you’ve never done drama in class before! Looking for something different for drama club, student theater, or speaking class? Want to spice up your literature or reading class and give students a new appreciation for Shakespeare? This version of Pericles for Students is for you.

“I’ve been lucky enough to read three of the resources in this series – consistently engaging, humorous, easy to read and well-graded. I am genuinely trying to hold back the praise with this one – these are top notch resources.” — Peter Clements, ELT Planning and Start-Up

„…just as exciting as the original…The exuberance that he displays in making this modern-day adaptation come to life under his guidance is admirable.“

„Paul’s Pericles is not a salvaged, sterile artefact to be admired behind glass, but a bouncy being, brimming with life, wit and energy….My own daughters loved taking part in performing Pericles under Paul’s direction for the Belgrade Youth Theatre and were thus introduced to the Bard not as a handle-with-care package ensconced in multiple layers of protective bubble wrap but as a flamboyant jack-in-the-box, “to glad your ear, and please your eyes“. — Andreas Roth, teacher, Belgrade

„Taking an old classic and simplifying it for better understanding. Shakespeare can be hard to understand but this book tells the same story but in a way that is easier to understand. Great for students and teachers.“ — Rhonda G., Goodreads reader