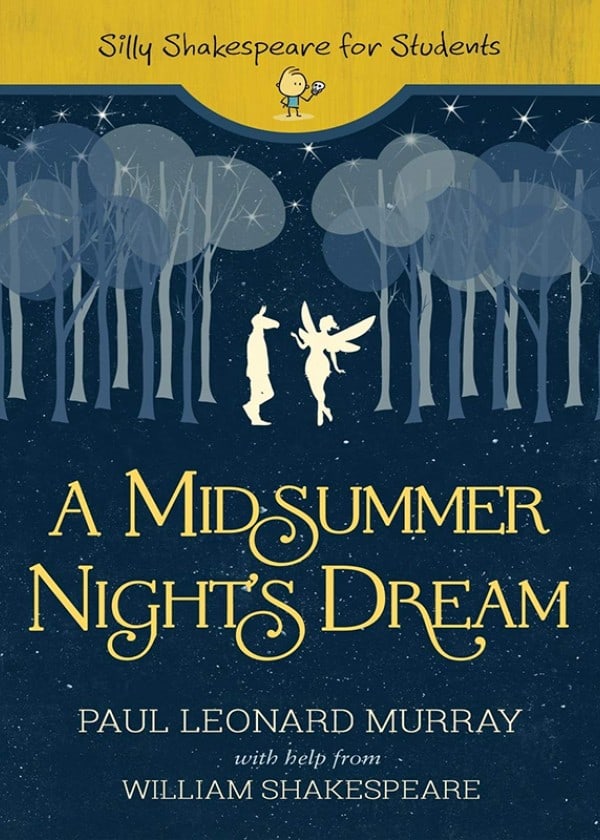 The concept is original and the execution brilliant. This is Dr Seuss meets Shakespeare, with all the joy of the former meshed with all the intrigue of the latter. —David Crystal, author of Shakespeare’s Words: A Glossary and Language Companion and Let’s Talk: How English Conversation Works

The Silly Shakespeare for Students edition of Shakespeare’s A Midsummer Night’s Dream simplifies the famous play without dumbing it down. It’s perfect for introducing students to the Bard and helping English Language Learners practice speaking and oracy skills while grappling with the classics. Author Paul Leonard Murray, director of the Belgrade English Language Theater, has cut the play down to an hour or so and made the language more accessible. But he’s kept all the funny parts! Not only that, the whole thing is written in rhyming couplets.

A Midsummer Night’s Dream is one of Shakespeare’s best-known plays for a reason. When Hermia’s father forbids her to marry Lysander, the couple run away to elope. Demetrius, who is madly in love with Hermia follows them, and Helena who is in love with Demetrius, follows him. Little do they know that the fairies are watching them. The king of the fairies, Oberon sends his servant, mischievous pixie Puck, to fix these foolish mortals’ woes, armed with a love potion. Hilarity ensues involving donkey-faced carpenters, dueling suitors, and some very confused Athenians.

Production notes and a summary of the play make putting on Shakespeare easy and fun, even if you’ve never done drama in class before! Looking for something different for drama club, student theater, or speaking class? Want to spice up your literature or reading class and give students a new appreciation for Shakespeare? This is the series for you.

„I really appreciated the fact that much of the rhyme and rhythm of the original text is kept in place so that it still feels true to the bard’s lyrical style.“— K.C. Finn, author of The Book Of Shade

„The rollicking humor of William Shakespeare’s somewhat bawdy play is retained despite the simplification of the text, and the innate rhythm of the English language still dominates the script.“— Lois Henderson

“ The opening had me glued from the start and it flows beautifully. Genuinely fun theatre to bring into class.“— Alan Hall, co-host, Phrasally Verbocious ELT Podcast

“I’ve been lucky enough to read three of the resources in this series – consistently engaging, humorous, easy to read and well-graded. I am genuinely trying to hold back the praise with this one – these are top notch resources.”— Peter Clements, blogger at ELTPlanning and co-author of Start Up

„perfectly encapsulates the spirit and story of the original while being fun and silly and appealing to the humour of the elementary student. I wish this had been available when my nephew was studying Grade 4 English“— Adena Lee, Goodreads reviewer

„…despite having read A Midsummer Night’s Dream countless times, I still found Murray’s text funny. Between the couplets and the storyline, it was a very joyful, wacky reading experience and I breezed through the entire play in under an hour… f all of the plays in the Silly Shakespeare for Students series is as good as A Midsummer Night’s Dream, then Murray will have helped make the Bard accessible for a whole new audience.“— Louise Hurrell, Reader’s Favorite

“ It’s no simple task to rewrite a whole classic in the form of couplets, and the author rightly merits high praise for his commendable efforts in this regard…. I whole-heartedly recommend A Midsummer Night’s Dream: Silly Shakespeare for Students to all young native English learners. It will also serve as an excellent textbook for learners of all ages, all over the world.“— Raju Chacko, Reedsy Discovery