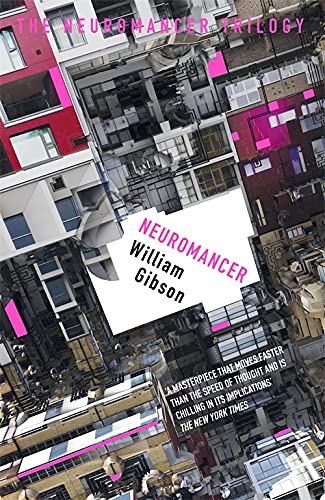 The book that defined the cyberpunk movement, inspired everything from The Matrix to Cyberpunk 2077.

The sky above the port was the colour of television, tuned to a dead channel.

William Gibson revolutionised science fiction in his 1984 debut Neuromancer. The writer who gave us the matrix and coined the term ‘cyberspace’ produced the first novel that won the Hugo, Nebula and Philip K. Dick Awards, and lit the fuse on the Cyberpunk movement.

More than three decades later, Gibson’s text is as stylish as ever, his noir narrative still glitters like chrome in the shadows and his depictions of the rise and abuse of corporate power look more prescient every day. Part thriller, part warning, Neuromancer is a timeless classic of modern SF and one of the 20th century’s most potent and compelling visions of the future. His later work, The Peripheral, has been adapted into a series by Amazon Prime, starring Chloë Grace Moretz.

Readers are hooked on Neuromancer:

‘Basically a futuristic crime caper. The main character is Case, a burnt-out hacker, a cyberthief . . . Challenging? Yes. But it’s electrifying once you get it . . . Neuromancer is in me like a teabag, flavouring my life, and I can’t imagine what it would be like if I hadn’t pressed on Goodreads reviewer, ⭐ ⭐ ⭐ ⭐ ⭐

‘For me, it was a sci-fi thriller, two of my favourite genres rolled into one. I was grabbed immediately by the characters of Cole and Molly – especially Molly with her attitude, her mirror eyes and the blades under her fingernails . . . This is a very visual book and it was easy to start choosing who would play the roles in a movie Goodreads reviewer, ⭐ ⭐ ⭐ ⭐ ⭐