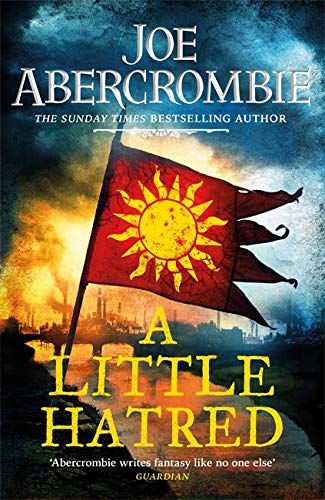 WAR. POLITICS. REVOLUTION.
THE AGE OF MADNESS HAS ARRIVED . . .

On the battlefields of the North, the next generation of would-be heroes rushes to make the same bloody mistakes as the last.

While the age of the machine dawns, the age of magic refuses to die. One might glimpse the future, through the curse of the Long Eye, but changing it is another matter altogether.

The chimneys of the industry rise, the cities seethe with opportunity, and even kings must kneel before the new power of the banks. But in the slums, anger is brewing, and soon it will boil over with a rage that all the money in the world cannot control . . .

Introducing a cast of unforgettable new characters, A LITTLE HATRED begins a new First Law trilogy which will have you gripped from the very start …

‘A masterpiece of fantasy fiction’ Starburst

‘One of Abercrombie’s best books yet’ SFX

‘Will keep you up long after bedtime’ The Sun